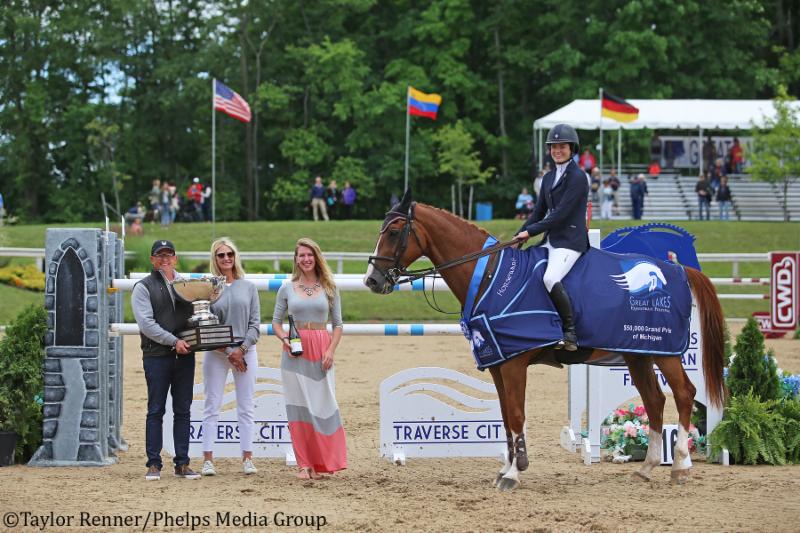 Traverse City, Michigan – July 16, 2017 – The $50,000 Grand Prix of Michigan CSI2* highlighted Week Two of competition at the Great Lakes Equestrian Festival (GLEF) on Sunday. Twenty-four international athletes went head-to-head in the Grand Prix Ring, but it was Sloane Coles who took home the first win for the United States during the first week of FEI competition at GLEF with Esprit, owned by The Springledge Group.
Course designer Manuel Esparza of Mexico challenged horses and riders over a 13-fence serpentine in the first round, but only seven were invited back to jump-off after going clear.
Twenty-one-year-old Kaely Tomeu (USA) and Gentille, owned by Siboney Ranch, produced the first double-clear round of the jump-off, stopping the timers in 40.930 seconds as second to go in the order.
It looked as though Tomeu would take the win as the only exhibitor to go clear in the tie-breaking round, as faults were collected throughout the next four rounds, until Coles and the 13-year-old Belgian Warmblood gelding entered the ring as the final combination to jump-off.
The pair galloped around the shortened track, adding no faults to their name, and crossed the finish line in 40.450 seconds to clinch the blue ribbon.
David Beisel and Harlow Investment Enterprises LLC’s Call Me Hannes finished in third place as the fastest of the 4 faulters in 39.860 seconds.
In addition to her winning title and prize money, Coles took home a bottle of wine, courtesy of Black Star Farms, and a gift certificate for a free custom portrait from Kristi’s Canvas. Coles was also presented with one of Bloomfield Open Hunts’ historic trophies, the Wayne State University Grand Prix Trophy from the historic Motor City Horse Show, by Dean and Wendly Groulx.
FROM THE WINNER’S CIRCLE
Sloane Coles – $50,000 Grand Prix of Michigan CSI2*
On Esprit:
“I’m pretty excited with Esprit. He’s really been on all year. He jumped great all spring after Florida. He came out, jumped well in Kentucky and then jumped with one down in the 4* at Upperville. I kind of came here really wanting a win in the 2*. He was third on Friday and I was lucky enough to go last in the jump-off, but Kaely, who was second, went pretty fast. I had to be right on everywhere. Esprit’s just been jumping amazing. He feels younger and younger so it’s nice.”
On the jump-off:
“It was a hard jump-off. There were only two clear but we were both very fast. I think everybody was really trying to win. He jumped easy today so I felt like I could really go a lot faster. He’s really peaking now but I’ve always believed in him. I just feel like I can go fast on him and he’s careful so it’s nice to be able to have these shows where you can compete in a 2*.”
On GLEF:
“I really love it here. This is my first year. I think the Morrisseys are doing a really great job. It’s just a beautiful area and you can spend time on the lake. The horse show has great footing and it’s been a nice change. I’ll be back next year!”